A Guide to diamonds and metal types

A Guide to Buying Diamonds

Our diamonds are carefully selected for their Cut, Colour and Clarity. We use a minimum standard of F/G Colour, VS Clarity to give every ring maximum fire and brilliance.

We only source conflict free diamonds. 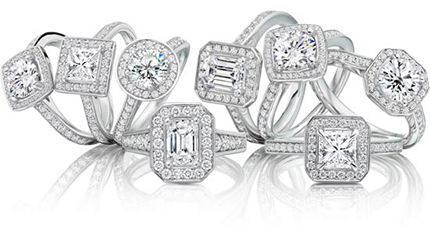 Diamonds are measured in terms of weight, not size. One carat is equal to 100 points. Two diamonds of equal weight can have very different values, because the quality is still determined by the colour, clarity and cut.

To transform the diamond into a beautiful gem, it is cut with precise facets. Well cut diamonds have amazing brilliance and fire. This is caused by light reflecting off the diamond’s surfaces.
The key to desirable fire and brilliance is proportion. Light striking a shallow cut diamond or a diamond cut too deep is lost through the sides or bottom and is not reflected back to the top.

While many diamonds appear colourless or white, they may actually have subtle yellow or brown tones that can be detected when comparing diamonds side by side.
Colourless diamonds are the rarest and most valuable of all.

Clarity is an indication of a diamond’s purity.
Clarity is determined by a diamond’s naturally occurring internal characteristics called inclusions.
These characteristics are sometimes not visible to the naked eye and they are what make each diamond unique.
The most highly prized diamonds are those with no inclusions, otherwise known as flawless diamonds.

Why is Platinum more expensive than Gold?

Is Platinum a difficult metal to work with?

If looked after properly it should not need to be repaired. Platinum requires a higher level of craftmanship and requires great skill to work it.

What other benefits does Platinum have?

The Properties of the Element Platinum

Palladium is a rare and lustrous silvery-white metal and belongs to the same group of metals as Platinum.

It was first discovered by William Hyde Wallaston in 1803. Although Palladium shares similar properties to Platinum it is much less dense - an identical piece of Palladium jewellery will weigh 50% less than in Platinum.

The weight of Palladium is very similar to that of 14ct gold, but because Palladium is historically less expensive than Gold per gram, Palladium jewellery is generally more competitively priced.

Why use Palladium in Jewellery?

The Properties of the Element Palladium

This site uses cookies to optimise the performance of your personalised use of the site. By continuing to browse the site, you are agreeing to our use of cookies. See our cookie policy here. AGREE